Multifaceted Lolita – Can Be Cute And Can Be Domineering

Multifaceted Lolita – Can Be Cute And Can Be Domineering

Before coming to the multiple facets of Lolita, here is a short introduction to Lolita for those who are already acquainted with this kind of fashion and those who are not. The Lolita is a Victorian styled women’s outfit that originated in Japan in the 70s and came to popularity in the 80s and 90s owing to Anime and Manga characters. The Lolita tries to create an extremely sweet, subtle and girly look with its feminine colours and designs, flared sleeves, gown like skirts and use of ornamental laces. You can see that it is highly inspired by the Victorian Age style of fashion for women and is just another modern version of the same for girls.

However, that’s certainly not all about Lolita. If things had been so simple, it would not have been a problem but there is a worldwide misconception amongst people who think Lolita to be just limited to cosplay or maid costumes. Lolita is everything but just cosplay or a costume to be frank and precise. Lolita has been popular since decades on the streets of Japan and has a long going connection with the Anime subculture. It is a fashion outfit for women on its own terms and is one of the most sophisticated and multifaceted pieces of clothing ever made for women. Labelling it simply as a costume or associating it with cosplay is quite derogatory. It just shows that many people are unaware of the different aspects of Lolita and thus misconstrue it to be just a costume. In fact, cosplay refers to costume play where people dress up in costumes to mimic the role of any character. But Lolita is not a character; it is a fashion statement that has been used to style characters in Anime or Manga series. So, let’s put an end to this misconception once and for all.

Here we can see how Lolita can be sweet and girly, sophisticated and subtle and absolutely domineering too.

These dresses are made in soft feminine colours like white, pink and powder blue shades. The fabric too is kept as light and soft yarn to convey a charming, girly appearance. They are decorated with lace and ribbons to create the typical romantically sweet look of a young girl. By wearing these sweet Lolitas, young women can look absolutely dolled up in the cutest and the most elegant way. The abundance of ornamental bows, frills and ruffles help to create the doll like look every young girl dreams to achieve at times. 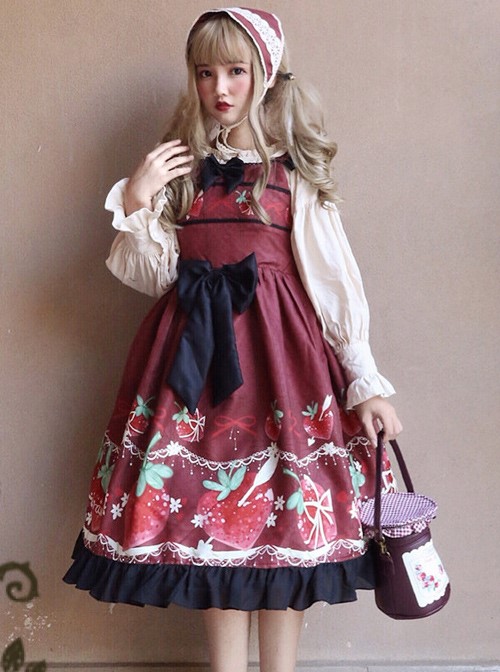 This white and wine strawberry print Lolita speaks volumes about itself. Firstly, nothing can get cuter than this for any young lady. This is the tailor-made Lolita to make you look ravishingly cute. In fact, it pries out your inner sweetness with its simplicity. The flared sleeves and black frills near the hem lend an old-world charm to this irresistibly sweet Lolita. 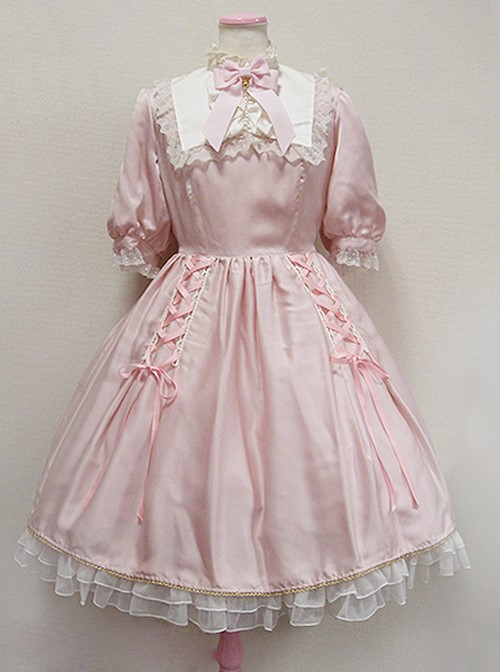 Do you want to style yourself in a fairy tale kind of way to revive your childhood fascination with Cinderella and Snow White? This baby pink Lolita with white frills at the hem and cute ornamental bows designing the dress is one such outfit to take you back to your days of fairy tales. Such fascinations never get old and you are never too old to let your youthful sweetness see the light of day again.

These dresses are styled as per the Victorian age dress code for women. The skirts are made longer to give them the appearance of European gowns. The colours are usually limited to graceful, light pastel shades and here too, laces and frills are abundantly used to emulate the classical Victorian and Rococo styles. 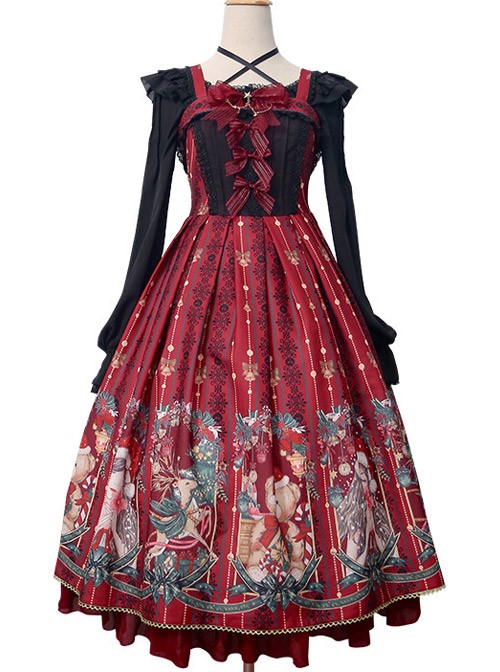 This is how classy a classical Lolita looks. Now do you understand why it is almost sinful to label Lolita as simply cosplay? These elegant gown style Lolita may be a little old fashioned for today’s women but as you know, retro is in and the evergreen Victorian age styles never really get outdated. Try wearing a classic Lolita instead of a gown and flaunt your feminine charm like never before. 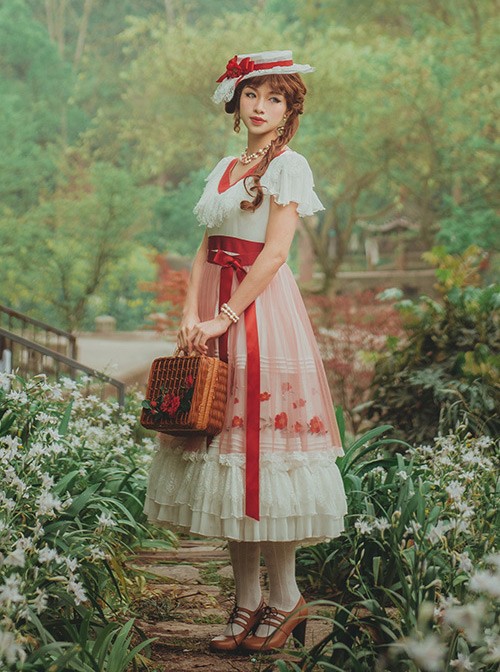 Can anything get classier than this for a woman? We don’t think so. These classic Lolitas pay tribute to the age-old image of the elegant lady immortalized in poetry and paintings. Classic Lolitas are thus made in pastel hues and given the high waisted long skirted look and subtle lace work to heighten the elements of classiness and grace. Any woman can look as pretty as a picture in a light classic Lolita on any spring or summer day. 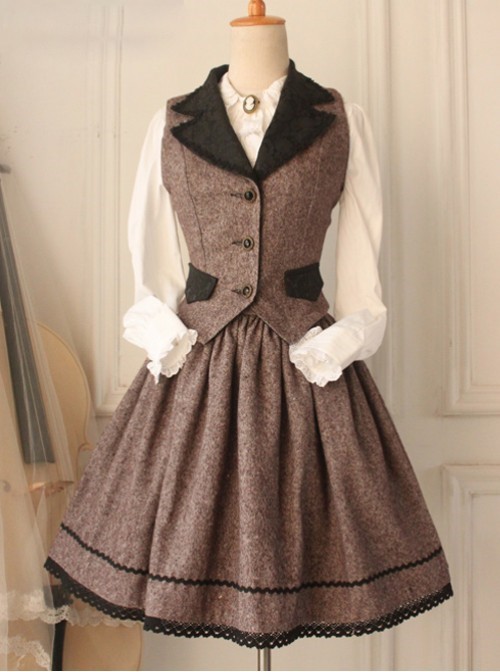 And here’s another truly classic Lolita styled up in the retro tea party fashion. These can never age and are meant to make you the center of attraction for all the right reasons.

As the name suggests, Gothic Lolita conveys the element of mystery and darkness associated with the term ‘Gothic’. Just as in Gothic films or novels, the dress too stays true to its genre and the styles are based on dark themes. The colour for these Gothic Lolitas is usually black and they make wonderful fashion choices for women. 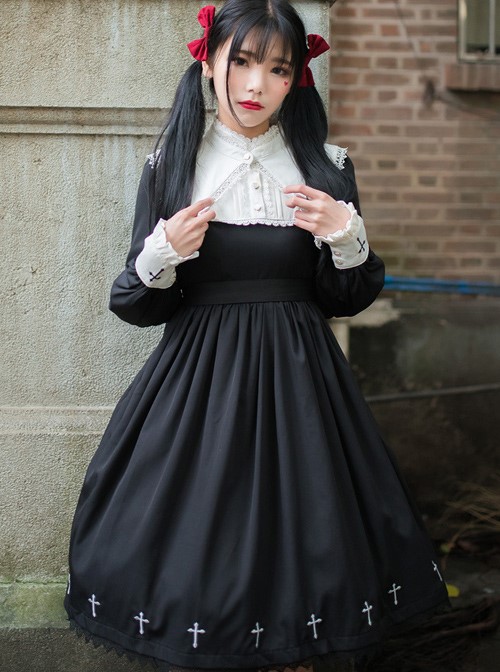 A classy black and white Lolita can make every day special. The nun style look has a mysterious gothic charm to it which makes it even more eye catching than any regular black gown. It stays absolutely committed to its genre even while being at its prettiest best. It conveys an undeniable sense of attitude of a strong and no-nonsense woman. 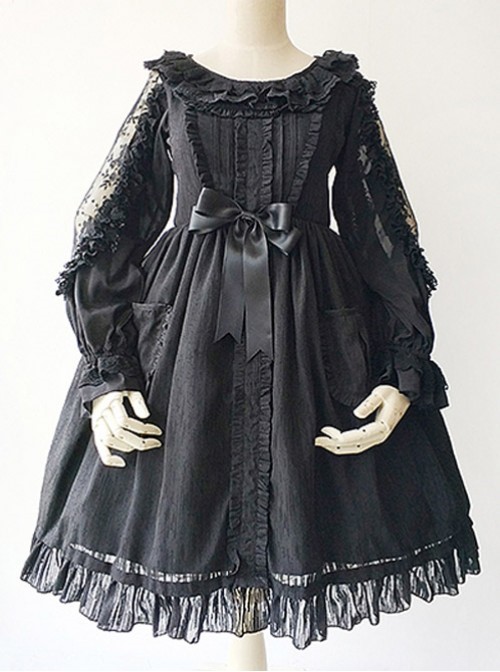 Don’t you feel that gothic spunk just by looking at this black lacy Lolita? This cannot just be a costume but a fascinating party wear too.

So, there are multiple facets of this outfit which will leave you stunned. Perhaps, awareness about the versatility of Lolita will help to break the misconceptions around it and make more and more people accept it with open arms as high street fashion. 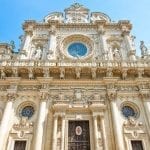 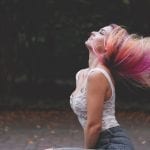 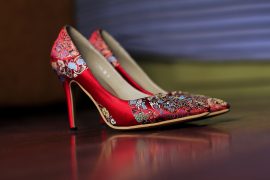 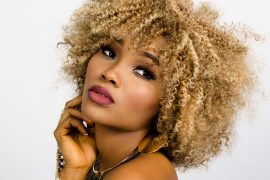 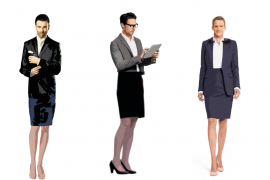